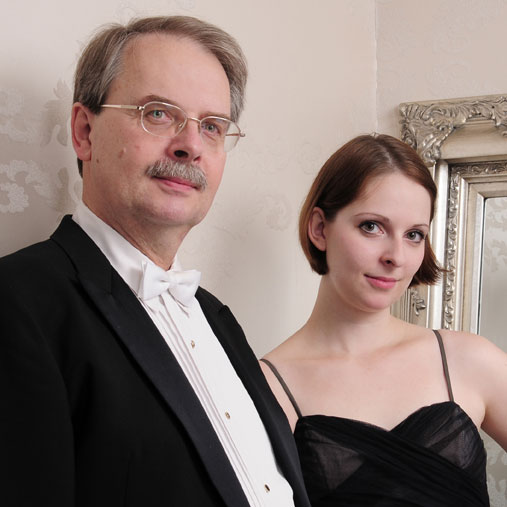 Perhaps it seems a bit unusual that I, as a violinist, am working on all kinds of transcriptions with harp.

As we get older, I often think that our memories of our early years in our lives start to fade and other than some special moments, we don’t really remember much before the tender age of ten.

In my case, I do have quite a number of vivid moments in my mind and one specifically was that of my father trying to find a harp and harp teacher because he wanted me to learn how to play this great instrument. I could never find out what the reason for his idea was, and ‘till today I have no clue why he gave up on that idea. Instead he then decided I should become a violinist, so I have to believe what he had told me, that he was hoping to encourage me to transcribe the violin literature for the harp.

As far as I know, at that time in Hungary, there was only one harp professor in the whole country, who for many years later still had only a handful of students at the Franz Liszt Academy in Budapest.

My father never found a harp, and I never became a harpist – end of story!

Many years later, I found out that my father-in-law, who played the flute as a serious hobby, also loved the harp and collected many LP’s with flute and harp music. He unfortunately was never in a place where there was a harpist with whom he could have played chamber music together. Even my wife learning piano would have liked to learn to play the harp, but there also, was no teacher nearby.

When our daughters were small, we encouraged ballet lessons as a way to learn movement and posture with classical music, so in Canada, where there are some excellent ballet companies, they took part in classes. It was really so cute to watch little girls practicing their pirouettes and arabesques in costumes or tutus. Especially our younger daughter loved the classes at the Royal Winnipeg and National Ballet Toronto, and when we moved to Vienna, Austria, she was accepted at the Opera Ballet School.

If you like ballet and know the basic literature of ballet music, it will be obvious to you that it has a certain colour, it is somewhat different than any other music, and if you listen more carefully you will notice that there is a much more important role for the harp than almost any other style of music.

I remember she was listening those days to music on constantly changing devices, of course a lot of ballet music too, until she came to us one day and asked very simply: I would like to learn to play the harp, can I?

Earlier, when she was just 5-6 years old we had tried to begin with instruments, of course violin, piano, but she just didn’t like the idea, but at this point, she sounded quite serious about her choice of instrument, so we looked for a teacher and made a day trip to the nearest harp factory in south Germany, and bought a simple, student instrument.

After one year we had to trade in this instrument for a full professional harp, the small one just wasn’t enough any more.

As a violinist myself, I never thought about writing music as I was busy as a concertmaster for decades, but in the last ten years or so as Katrina became a professional harpist, I developed more and more interest in it. We tried with some simple works, and realized how much fun it is actually. Also, as I had more spare time, we started to play together, of course first Saint Saens. We put together our first full program, and realized that the literature is, well, not extremely huge for harp and violin. Even, we had to put some solo harp works on the program if we didn’t want to play too many of the somewhat less interesting duos of the literature for this ensemble.

At this point, my idea of enlarging this niche of the literature, was ready to go.